“To breathe is not to live. To travel is to live!”

The problem is, we never have very much money to travel. But that doesn’t stop us! My nickname, Bohemiana, is what my husband started calling me because of my Bohemian heritage on my grandmother’s side; like her and all true Bohemians, we know how to find a good deal and we hate to pay full price. Thanks to that trait, we’ve been able to take some awesome cheap trips over the years.

Prior to 1987, my life dream was to go to Europe. It seemed like a world away (a lot more than the half a world that it really is) and incredibly expensive. My fourth job and third career was with a company that made this dream finally come true. The job took me to Acapulco within a couple of weeks of starting and then a few months later to of all places, Istanbul!

I was sitting in the airport waiting for my flight to Istanbul when I realized how easy it is to travel. You just buy a ticket and get on a plane. It was extraordinary that it seemed so complicated before that. Granted, that trip was paid for by my company, and it was quite deluxe. But the trip to Istanbul just reinforced my feeling that there is so, so much more to the world than I could imagine and I wanted to see it all. 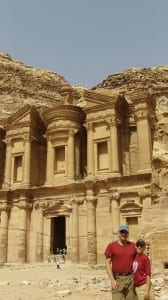 I actually quit that job three years later because the company wasn’t sending me on enough trips. Since then, on my own, with my husband, Bob, and with friends, I have been to more than 30 countries and lived in two others (Japan and Czech Republic–then Czechoslovakia).

I’ve never had much money to travel but it’s a priority for me and my husband. Fortunately, Bob has the same love of travel and happily goes wherever I drag him. I hope this blog helps people realize “not enough money” is never a reason not to travel. I’m going to share the cheap tricks we have come up with over the years that have enabled an ordinary middle-aged couple to travel around the world. It’s never too late to start.